A message from Kerrilyn Miller – Coastal BUDS Board Member 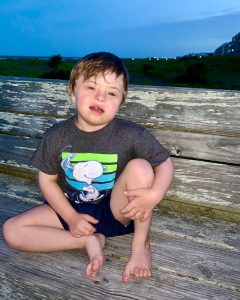 When we put up this website. The Coastal BUDS Board asked, “Should we keep the blog or take it off? If we keep it someone has to take that first step.”Of course I jumped in feet first and said, what if I shared my story of navigating life as a parent with co-occurring Down syndrome and autism?  They all agreed that would be great.So here I am on my fifth attempt at this blog. It certainly isn’t as easy as I had anticipated it would be. If you haven’t met me, I should add I really do listen to my gut and make most decisions quickly.I should start by saying I had suspected Dax had autism for a while. A few indicators started between 2-3 years of age. The biggest was hand flapping when he was excited. Anytime I asked who I thought the experts were, (parents of children with Autism Spectrum Disorder (ASD) as well as teachers and therapists at preschool) I would get a pretty quick “No, I don’t think so at all.“ I quickly learned that there are so many misconceptions surrounding a co-occurring DS/ASD diagnosis’ that the voice I should have listened to was my own. The best person for the inquiries that I had would have been a clinical psychiatrist. As a solo parent navigating ALL of my child’s needs in private insurance and self–pay, a psychiatrist wasn’t at the top of our priority list, but now we are very thankful for her.Misconceptions, there are quite a few out there. The general public’s opinion, although well intentioned, is like a lot of information around Down syndrome, archaic. The first place I reached out to online that had relatable facts was the National Down Syndrome Society (NDSS) website. I believe it was there that I read that one in six individuals have co-occurring DS/ASD and that it is often undiagnosed. A common misconception is that individuals with Down syndrome sometimes have autistic–like traits. No, my friends, they truly have autism.Another misconception is that our loved ones mimic others, therefore they can learn behaviors. I can tell you firsthand that although a person with Down syndrome might mimic something they see an autistic person do, they aren’t going to continue the behavior. It does not serve them the way it does a person on the autism spectrum.  For my son, many of the signs of autism did not start until he was 3 years old.Sensory issues were a big indicator. My sweet, adorable boy from his first haircut to three years old would sit for the same barber, like a dream.  I would walk in so proud, sit him down and marvel at that good little boy getting his hair cut. Then at age three that all changed.  Haircuts, nail clippings, hair washing and brushing, teeth brushing all became a nightmare every time. Of course, some people without autism have issues with these necessary activities. However, for people on the autism spectrum completing these everyday activities is a struggle.  My boy is now in Applied Behavior Analysis (ABA) therapy and all of these issues are almost complete non– issues. The point is sensory processing was his first challenge. This week I was able to have that proud mom moment again at the pediatrician’s office. My guy let them take oxygen, blood pressure, and temperature. He sat there so sweetly and watched patiently.  The next big hurdle for us was speech. He had started speaking. We used flash cards for the alphabet. At 3 he knew almost every letter and could say them, even in random order.   Then he regressed. To me it almost felt as if he stopped talking altogether, but you could get little words here or there mixed with signs.  Another big indicator for people with this diagnosis is movement. Now that he is older the hand flapping has totally stopped. I know when he is happy. This is 99% of the time, especially while he is listening to music.   He loves to rock and sing the song (we get plenty of words when singing). This is not a behavior that gets any correction. This is my son. He is happy, singing, sometimes singing loudly, always enthusiastically, smiling, and moving his body in a way that feels good and expresses his joy. His joy is and always will be my number one priority.My delightful, beautiful little boy has always had challenges. At birth his foot needed correction and he was in casts and braces for almost a year. His vestibular system has been slow to catch up so his balance and walking have been a challenge. Yet here we are. My boy shows up every day completely present. He goes to school and multiple therapies a week with a smile on his face. He tries his best with little push-back. To be honest with you he tries harder than most children I have ever known. It is my biggest honor and blessing to be his advocate, defender, friend and best of all his mother.